What are the children up to?

One of the reasons we’re running the summer ☀️ survey is because lots of people have been saying the kids need to ‘catch up’ this summer (see this campaign from the Department for Education). BUT we had an inkling that kids might already be doing plenty of stuff this summer.

This week we got our first glimpse of exactly what they’re up to.

Even though they’re not in school, over half of your children read a book, and lots of the younger ones have drawn pictures. Around a quarter have played a musical instrument and a fifth have watched an educational video or lesson.

More girls are doing the activities in our list than boys… it makes us wonder what else boys might be up to? If you have other items that we should be asking about, let us know! 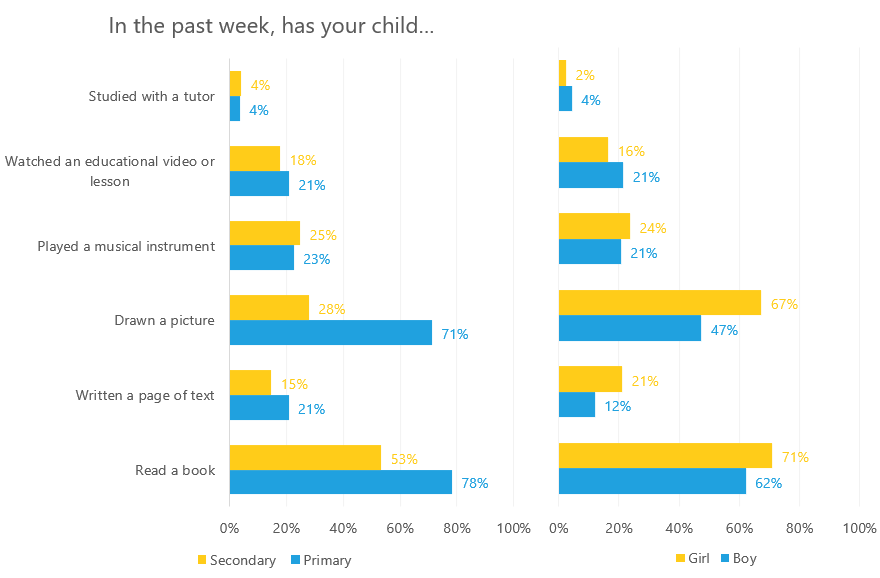 What have you been doing this week?

Looking at parents who aren’t teachers, around a third of you have been on holiday at some point in the past week and half of you have been working. Sadly 4% have been self-isolating. We hope this didn’t spoil any holiday plans. 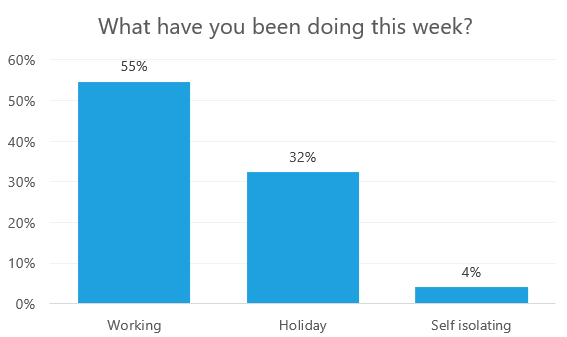 Who has been looking after the kids?

Many of you have spent at least some of the past week supervising your children. Slightly more mums than dads have been in charge of the kids.

If you haven’t been supervising them, who has? Well, 2 in 5 of you said  that once your kids are secondary school age, they don’t need supervising. 1 in 5 of you have sent your children to a summer camp or class (particularly those with younger kids). Very few of you are paying childminders or equivalent – presumably the cost of that would be pretty high over the 6-week break. 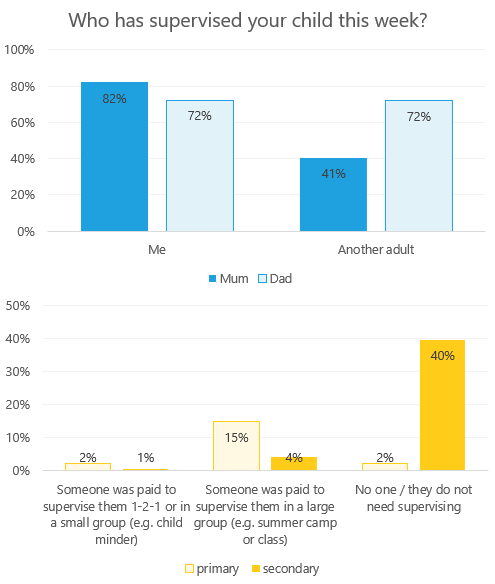 As well as our summer ☀️ survey results, we also liked these 2 findings from the past week…

Our question last Sunday about what you would choose as a free service for the rest of your life caused quite a debate in our Facebook Group and had one Pinger commenting on Twitter that “this question had me flummoxed 🥴.”

Free childcare was a big draw for parents with younger kids, whilst those with older children found a free home chef pretty tempting. However, despite all the debate, free house cleaning came out as a clear winner for all parents in the end. As one Pinger in the Facebook Group said “you know you’re a school age mum when you choose cleaning for life 🤣” 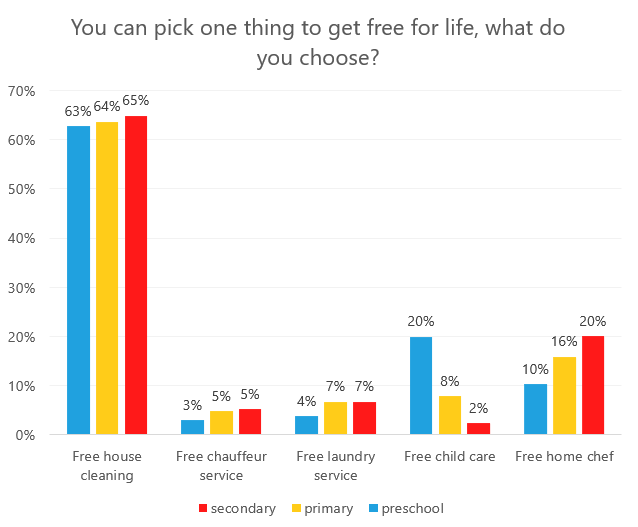 Have you ever had a naughty step in your home?

Just over half of you said that you have had a ‘naughty step’ in your home at some point. The ‘naughty step’ was popularised by “Super Nanny” Jo Frost around 10 years ago and is an approach to behaviour that seems to have caught on more in some parts of the country than others… Over 60% of parents in Yorkshire and the Humber, the West Midlands, and the South East say they have used the technique, compared to fewer than 50% in London or the North West.

It’s GCSE and A Level results next week (good luck to all those receiving them!) so we’ll be asking questions about exams alongside our regular summer ☀️ survey questions. Download the app and set your notifications to PING every day!