Focus: on school closures due to Covid

Parents were massively relieved when the kids went back to school after the summer. Home-schooling had presented significant challenges, not least the difficulty of trying to earn an income alongside teaching children at home.

Back in September, parents said they were worried that they would have to home-school again, with 7 in 10 thinking it’s likely this academic year. Not even half a term into the new year, it’s looking like they could be right.

Whatever way you look at it, there’s a second wave of Covid-19 hitting the country. Wales and Northern Ireland have both announced ‘circuit break’ lockdowns over half-term with schools closing for an extra week in Northern Ireland and only re-opening for pupils up to Year 8 in Wales.

Despite months of practice,  fewer than half of parents think home-schooling will be any better if they have to do it again. In fact, 1 in 5 parents with kids in both primary and preschool are worried things will be actively worse.

So, with all this sitting in the back of their minds, do parents want schools to close now? We asked two questions to investigate.

Should schools shut in areas with the ‘high’ Covid alert level?

One in three parents agreed that schools should be shut in areas with the ‘high’ Covid alert levels. However, when you isolate the responses for parents who do not themselves work in schools, only one in five agree and over half disagree. 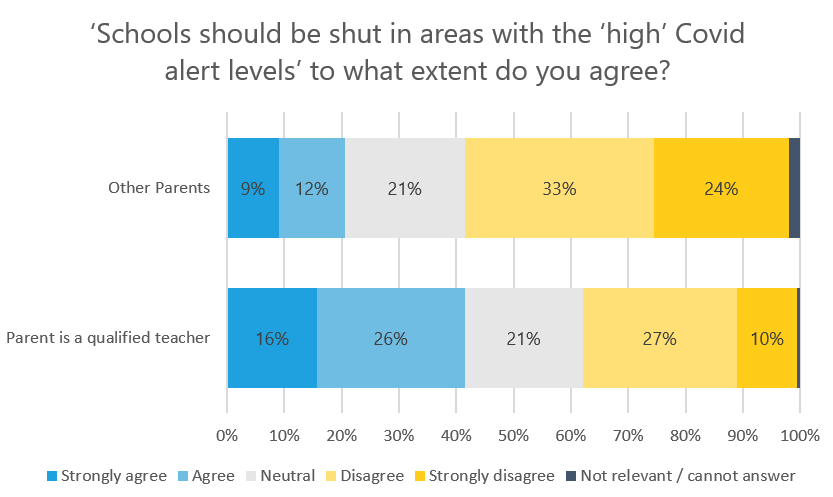 Should schools close for a Covid ‘circuit break’?

Half of parents agreed that schools should close for a Covid ‘circuit break.’ But, again, if you look only at those who do not work in schools, the figure drops to around a quarter. 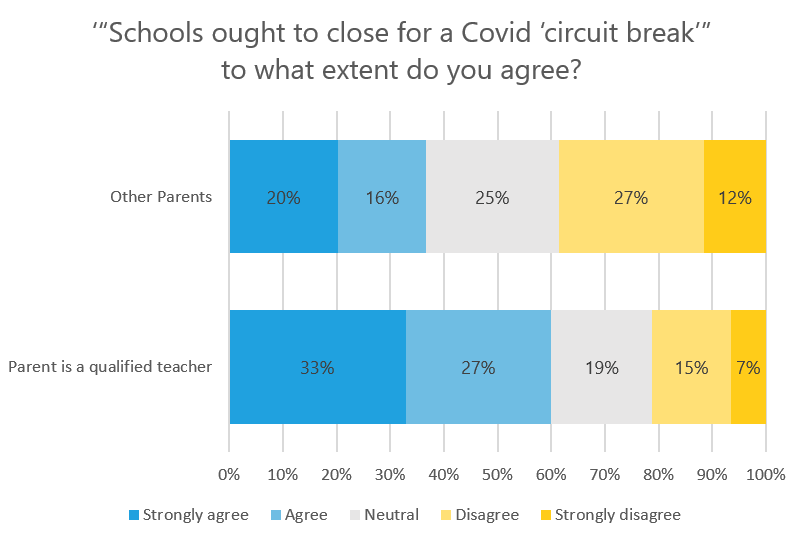 Why are the responses different?

One of the things that gets missed when scientists talk about the low rates of Covid infection among children is that teachers nevertheless have to spend quite a lot of time near a lot of children! Have you ever tried to socially distance from a 4-year-old… you’d have more luck keeping your distance from an amorous leech! Hence, teachers are often more concerned about school staying open because of their own health.

On the other hand, if schools close, even if only for an extra week, it impacts on parents’ ability to work. We already know that a quarter of parents (who are not teachers) will have to take time off over half-term due to lack of alternative childcare. If this extended, annual-leave allowances will inevitably run-out, and parents will be back to juggling their own work with their kids’.

So, what’s the solution?

The government is (currently) sticking to its line that schools will not close again. Schools meanwhile have their own Covid-level system in the event that the number of infections continues to rise. It seems that even if short closures are unavoidable, extended periods of closure (and the ensuing home-school requirements) are not on the table again. Yet.