Hurrah! We have our first week of Parent Ping data!

Thanks to an amazing 560 parents signing up by Friday, we are able to share some really interesting findings already (however, the sample isn’t representative yet, so it does need to be treated with caution).

This week we have been asking lots of questions about schooling during lock-down. We really wanted to get these questions in before term ended for everyone and home-schooling becomes a distant memory (wishful thinking perhaps).

So, here’s what we found out… 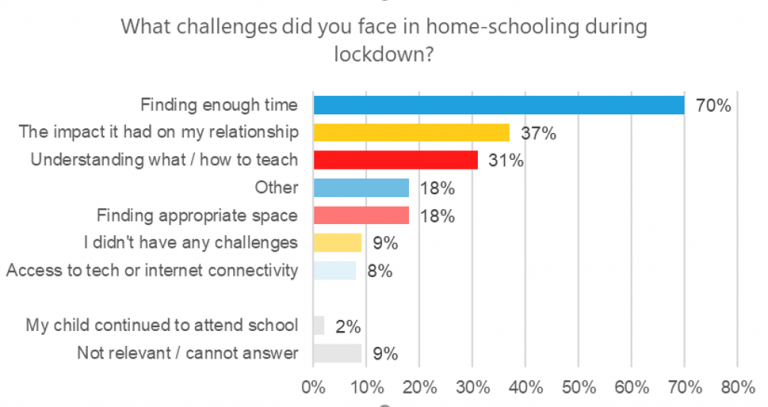 For parents, finding enough time to run home-school was the biggest challenge by some way. However the impact that home-school has had on relationships was also mentioned by over a third of parents – an area that has not received as much coverage during lockdown as, say, access to tech or internet connectivity (mentioned by just 8% of parents). This was the same for both mums and dads.

The whole experience has left a small but significant number of parents contemplating changing their children’s education by moving school or home-schooling. Nine per cent of all parents (and 13% of dads) told us they were planning to do this… we will explore further over the summer.

Of course, parents haven’t been home-schooling in a vacuum. They have been supported by their schools who have been sending out a range of resources and materials, as well as in many cases teaching online. However, we were concerned that it is a mixed picture and one way the bar could have been raised on this is if the government had set out their minimum expectations of schools over the lock-down period. We therefore asked parents what they thought this minimum standard would comprise.

The most common response (given by 70% of parents) was feedback on children’s work. This is probably not a finding that our pals over at Teacher Tapp will be very happy about as ‘feedback’ is a hotly contested area amongst many teachers, with much of the evidence suggesting that feedback can take a disproportionate amount of time compared to the impact it has on learning. So, another one to dig into further over the summer.

It was also interesting to find out that a third of you have been going above and beyond the provided schoolwork and finding resources in addition to what schools provide. In the case of primary schools, over half of parents sought out additional resources last week. 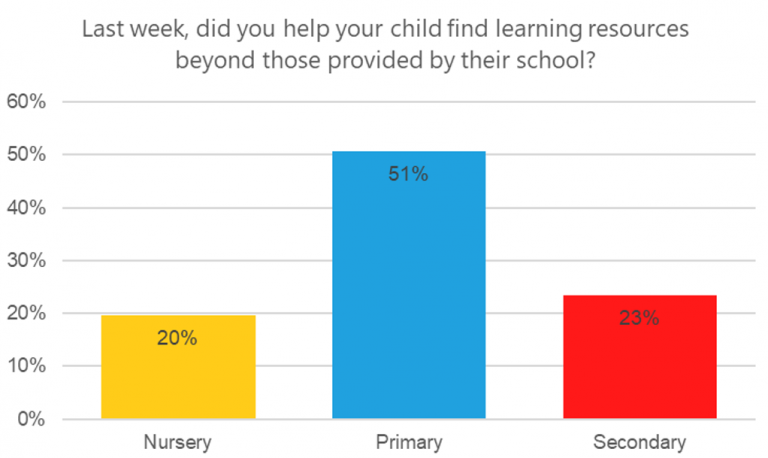 Do you ever pay your children for doing chores at home? Sixty-five per cent of you don’t… we wonder if that means that there’s no cash transactions, rather than no chores?

The most clicked tip this week was how to watch a family film in 33 easy steps, if you missed it you can catch up here

We hope that you enjoyed the first week of Parent Ping, we’ve got a great selection of questions and tips lined up for you next week too, including…