We’ve got a chocker-blog for you this week covering kids getting vaccinated, stay at home parenting and school choice. So, no time for small talk… let’s look at the findings!

How do parents feel about children getting the Covid vaccine?

We’ve been keeping an eye on attitudes toward vaccinating children against Covid 19 for a while now. So, what did you think when the news broke last week that the jab has been approved for 12-15 year olds? The proportion of you saying you’d rather wait has dropped (but not that much), and there’s still a steady 7% who don’t want their child to have it at all.

Zoom in on those with children in the 12+ age-group however, and you can see a much higher willingness to participate. 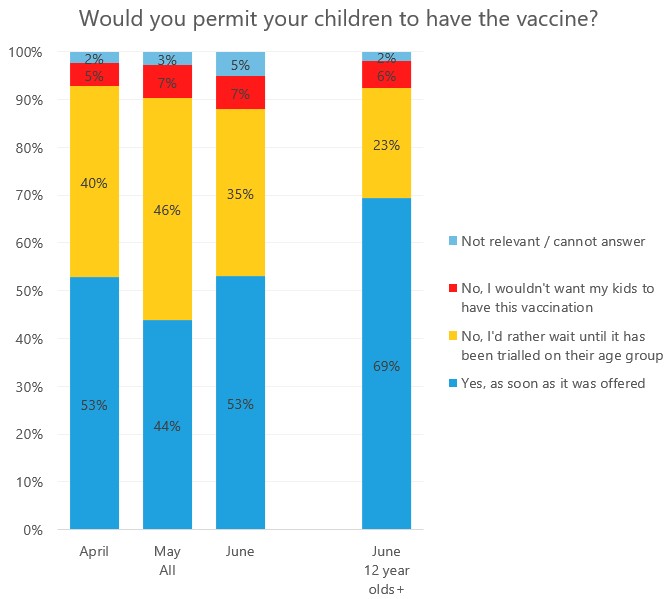 LinkedIn recently allowed parents to put the phrases ‘stay-at-home parent’ as a job in their CV. Is it a useful change?

Half of mums and a quarter of dads told us they had – at some point – been a stay at home parent (although quite a few wouldn’t have used that exact phrase to describe themselves).

This is quite a shift from the previous generation… 63% of Pingers told us that their mum had stayed at home to look after them (at least for some part of their childhood) compared to only 3% who had a dad who ever did this role.

Are you happy using ‘stay at home parent’ as a job title? Half of you said definitely, and 7 in 10 said it ‘probably’ or ‘definitely’ counts as a job title. There were some regional differences though, with Pingers in the Midlands less convinced than Pingers in other parts of the country.

The one question we forgot to ask, is whether you would like to be a stay at home parent… look out for that one next week!

We’ve looked at school choice before, but as we head toward ‘that’ time of year again here’s another look! Over a third of you have children who do not attend the nearest school to your house. Secondary school and 6th form make this even less likely (42% and 60% respectively).

Would you be willing to move house to get into a particular school? Around 1 in 10 of you said you’ve actually done this, and half said you’d do it if you could afford it. Attitudes vary quite a lot depending on where you are in the country (but beware of our small sample in the North East which we think is skewing the response there, at least a bit).

9 out of 10 Pingers visited their child’s secondary school before choosing it, compared to 8 out of 10 who visited primary schools. It doesn’t seem to make much difference whether siblings already attend the school, in most cases you still went to visit.

And when does all this visiting start? The majority of of Pingers start the process of choosing their child’s secondary school more than a year before applications are due.

If you want more on this topic, we’ve also written a blog about your views on choosing grammar schools.

We learnt this week that Pingers are very lovely people (obviously)! When we checked who would take a forgotten piece of equipment to their child at school, we found that most of you would make a special trip to get the kit to the kid. This is despite a third of you telling us that the children pack their own bags and a third of you having a 15-30 minute journey to school!

Next week we have questions about end of term gifts, end of term reports and reading. Don’t miss a question! Download the app and set your notifications to PING every day!