Should the government increase the number of free school meals?

We’re all getting into the swing of Parent Ping now, & we’re starting to see some really interesting data. This week there were TWO questions which crossed over with our bezzie mates at Teacher Tapp. We also took a bite out of school food, looked at what’s worrying you about returning to school, & had a quick look at end-of year presents for teachers.

Last week, school dinners hit the headlines as part of the government’s new obesity strategy, so we decided to check up how many kids have them & why…

We found that over half (54%) the Parent Ping children have school dinners. This was highest in nursery (61%), then primary (56%), and lowest in secondary (45%). There was a slightly bizarre difference between mums & dads, with fewer dads reporting that their kids have school dinners (47%) than mums (58%).

It is unlikely to be because it’s the cheapest option… 56% of parents report that for them, packed lunches are cheaper than school dinners. This was the case for half of parents of primary-aged children (many of whom will receive infant free school meals, and you don’t get cheaper than free!) and three-quarters of secondary aged kids.

With this in mind, it seems like the government’s plan to increase the number of free school meals could be a good one. 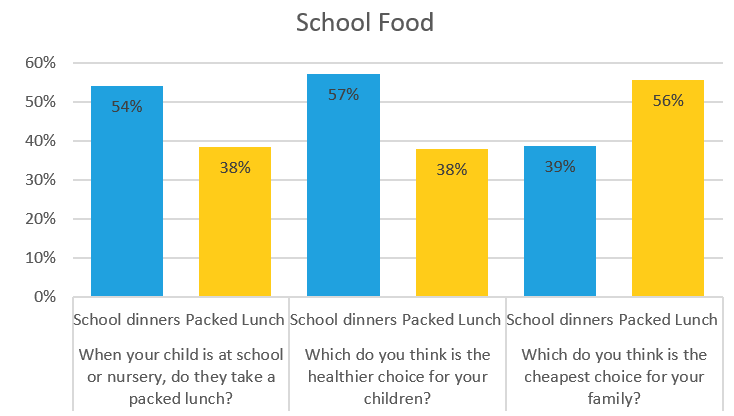 2. The difference between parents and teachers

The one where they agree

In a spookily similar set of statistics, half of parents (50%) & half of teachers (51%) said that the responsibility to make sure children can read lies equally with parents & school. Of the remainder a third of each group thought that responsibility lies with the school (although no parents thought it was a responsibility for the school alone) & a sixth reported it is more of a parental responsibility. Could this be skewed by parents who are also teachers? Possibly, but see below for when parents & teachers disagreed. 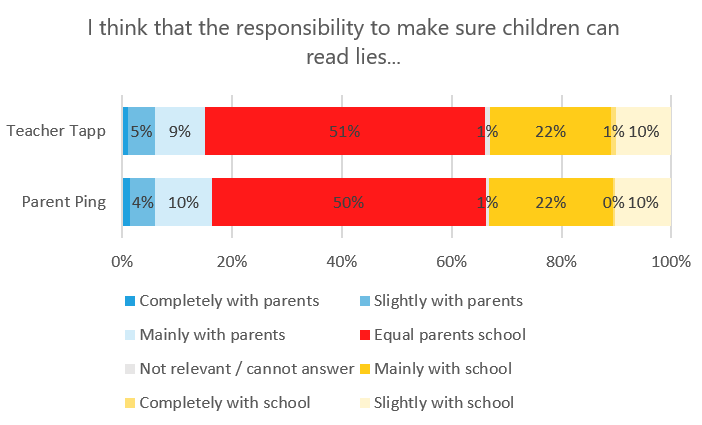 But while we are talking about reading, we also found out this week that Parent Pingers are a very literate bunch. Six in ten of you reported that you had read a book yesterday & eight in ten of you recall your parents reading to you when you were a child. Some Pingers even took to social media to complain that you didn’t have the opportunity to tell us that you had read a book ‘today’ (which is because some people get their notifications at 8 in the morning when they may not have read a book, & some get their notifications at 8 in the evening when they may have had a bit more time to read a book. So to make it fair, we ask about yesterday instead).

95% of parents also told us that when reading to children they do the voices, with only 1% of dads saying they never do this. Which we just think is very lovely.

The one where they disagree

If you were allowed to take control of key school decisions, which would you change? We asked this question in three different ways. We asked parents about the school that their children go to, we asked parents about all schools, & we used Teacher Tapp to ask teachers what they thought parents at their school would answer.

The results show quite a disconnect between what parents want, and what teachers think parents want. Teachers think that parents want a lot more change than they actually seem to, particularly in the case of the school their own children attends (a quarter of parents said that they wouldn’t make any of the listed changes at their own school).

There are two areas where more parents than teachers think schools should do something differently: curriculum & marking. This may surprise some teachers (& policy makers). These decisions are much closer to the core business of teaching & learning than some of the other more superficial items in the list (e.g. school uniform) & have not traditionally involved much parent consultation. Maybe this Parent Ping finding will make schools think about this differently in future. 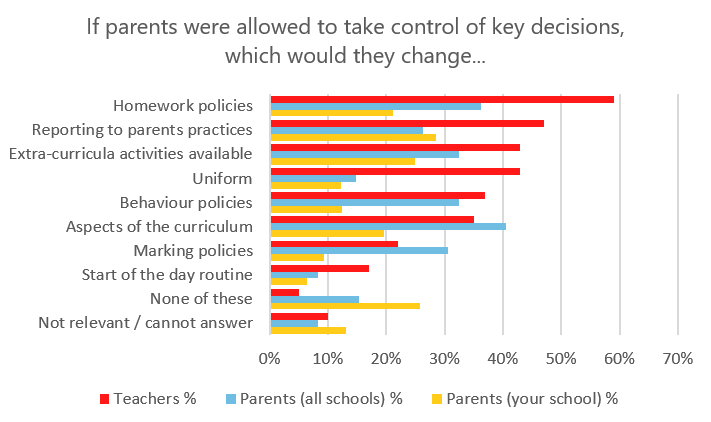 We asked parents, what (if anything) is worrying them about the return to school. Overall, the biggest worry for parents was someone in their family catching Covid (58%). This fear is highest amongst those with very young children, particular those with a preschool-aged youngster (67%). Parents of this age-group were also worried about childcare in September, particularly those with kids in both preschool and primary (42%).  The return to school was also a worry for around half of parents, with those who have children in both primary & secondary schools being most concerned about this – presumably some are facing a logistical nightmare. Finally, lost learning was a concern amongst around a third of parents (34%) with school-aged children… More on this one next week. 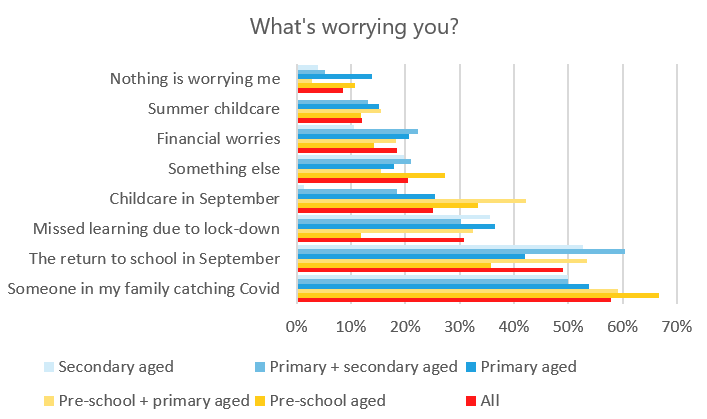 We also checked on who has bought school uniform this summer. Nearly half (47%) of parents have already bought some new school uniform for next term, least prepared are the secondary school parents (presumably old-hands at the school uniform malarkey by now) where just under a third had yet to make a purchase.

Inspired by the government’s new ‘fix your bike voucher scheme’ we wanted to check what proportion of kids have their own bike. Overall, we found that 8 in 10 children have their own bike. Primary age kids were most likely to own a bike (92%) and secondary least (76%). There was a bit of a strange discrepancy between mums and dads on this one with 25% of dads telling us that their child didn’t have a bike compared to 14% of mums… we hope we’re not revealing the family secrets here! 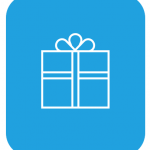 We also asked if parents had bought or contributed to a present for their child’s teacher. 43% had, but in a clear example of the devil being in the detail, only 5% of parents with a secondary aged child did this, compared to 68% of those with a primary aged child.

Most parents thought that teachers were equally deserving of an end-of-year gift as past years, other than those parents with a pre-schooler and a primary-aged child. Here the majority thought teachers were more deserving this year – an insight perhaps into how tricky home-schooling this age-group was during lockdown.

Our most clicked tip this week was an article on The Conversation looking at what should be taught by teachers, and what by parents. If you missed it, catch up here: https://theconversation.com/what-should-be-taught-by-teachers-and-what-by-parents-34866

We’ve got lots of lovely questions prepared for you next week including a look at kids birthdays & your thoughts on A-Levels.

You should also look out for tips on social media, lying & adjusting to socially distanced life. 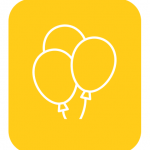