So, week 4 of the national lockdown is done & dusted… how are you doing? Frankly, it seems like things are tough. We’ve got the full analysis on how home-learning is affecting you and your children in this week’s blog. We also take a peek at chores (because being a parent is about more than just home-learning) and we have NEWS about our new BIG Lockdown-Learning Parent Survey.

How are you coping?

As we entered week 4 of lockdown, primary parents were at their lowest ebb so far, and this was before the PMs announcement that home-learning will continue for at least another 6 weeks. On our home-school scale of 1 (“I can’t do it at all”) to 10 (“certain I can do it”), only 56% are now in the positive half of the scale.

The idea that, through supporting your child’s learning at home, you are making a valuable contribution to the country, seems to offer little recompense. Less than half of you told us you thought about it like this and one in five of you actively disagreed with the idea.

What are the kids up to?

Whilst we can’t ask kids directly what they are doing during home-school, asking you parents is definitely the next best thing. This week we found out…

Around a quarter of primary-aged kids and nearly half of secondary-aged kids did not spend any time outdoors last Tuesday. Of those that did get outside, amongst two-thirds of the younger age-group and four-fifths of the older ones were out for an hour or less.

Finally, it turns that kids like just about all forms of home-learning less than their parents (shocker!). Overall, some form of live lesson is popular with both groups, as are most other online activities. 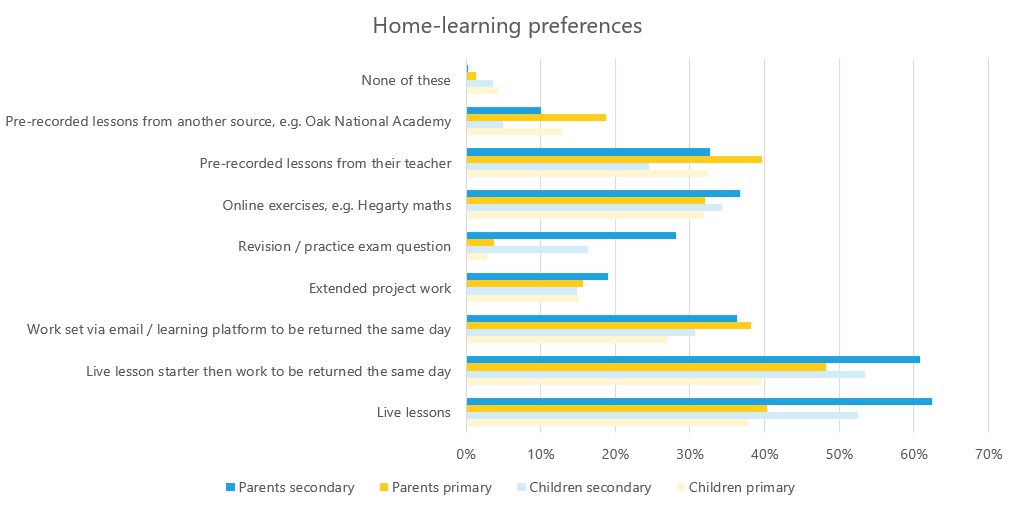 And also (because parenting isn’t just about home-learning)

We wondered if, as everyone is at home all the time, more of you are doing chores (we first asked about this last September, so have a good comparison point). It turns out however that there’s little difference in chores in lockdown and under more normal conditions. Just like last September, parents of younger children do the most washing  (half do over 5 washes a week) whilst a chilled-out 30% of dads tell us ‘someone else deals with the washing’ (compared to just 5% of mums) 🙄

Finally, as in August tidying up is still causing the most rows 😖

As some of you might have heard, we are starting an exciting new collaboration with Teacher Tapp and the Education Endowment Foundation called The BIG Lockdown-Learning Parent Survey.

We will be working together using Parent Ping to ask questions about home-learning (just like normal), the main difference will be that some parents will be asked by their school to sign up.

Because we want LOADS of parents (and schools) to participate we are offering PRIZES. Starting next week there will be weekly draws with some prizes that anyone can win, and some prizes that only parents who have signed up via their school can win. You can find out more about the project here.

Your answers matter more than ever! Don’t miss a question… Download the app and set your notifications to PING every day!